Bone broth is getting a lot of attention lately, and for a good reason. It is popular in the keto, low-carb, and paleo communities due to its many health benefits. It can be sipped from a mug or used in recipes in place of broth or stock. For example, it’s great in casseroles, soups, and stews. In this article, we’ll go over what bone broth is, the health benefits, and ways you can incorporate it into your diet. Plus, we’ll explain what a bone broth fast is and why you should consider giving it a try.

Bone broth is a nutrient-dense stock that’s made by simmering animal bones and connective tissue. Most recipes call for simmering for 12-24 hours. It can then be used in soups, stews, sauces, and gravies or in many recipes that call for broth or stock. Many people also enjoy drinking bone broth as a health drink.

Bone broth is not new, even though it may be new to you. Back in the day, hunter-gatherers made bone broth by boiling inedible animal parts like bones and hooves into a broth they could drink.

Most bone broth has at least trace amounts of several nutrients. Adding vegetables to bone broth can also significantly enhance its nutritional benefits.

Broth and broth-based soups can help you feel full despite their low-calorie content, making it an excellent choice for people following a weight loss diet plan.

The high water content in bone broth helps you stay hydrated. Water makes up 70 per cent of the body and impacts virtually every bodily function. 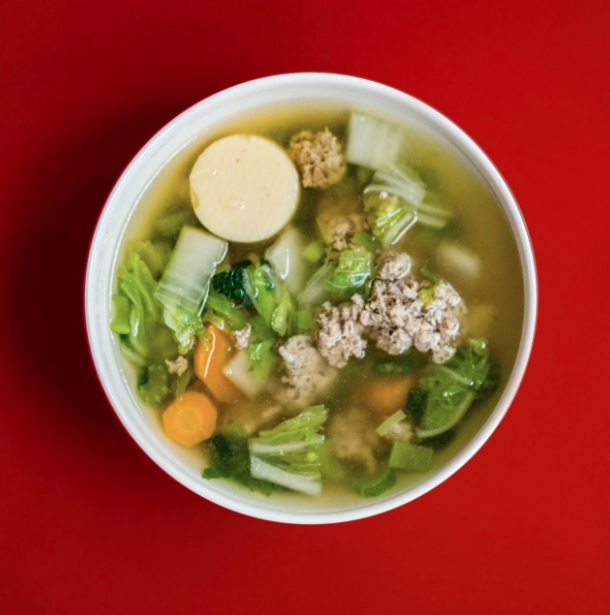 Bone broth is easy to make and a flavorful part of many complex, delicious recipes. It’s also a great way to use otherwise inedible animal bones and tissues.

Every batch of bone broth is unique, so it’s impossible to calculate the exact nutrient content. However, since the beef stock is among the more common broths worldwide, it’s a decent reference point. One cup of beef bone broth contains

What’s So Great About Bone Broth?

Well, for starters, it comes from the bones, which are a repository for nutrients and healthful compounds that our bodies crave. In addition, the bones themselves are loaded with minerals, all the same minerals we need in our bones, as well as being used in thousands of biochemical reactions throughout the body, needed to make our complicated machines run properly.

But minerals are only the beginning. Because the bones’ centre houses the bone marrow, whose nutrition is released and incorporated into the broth via simmering, raw materials for blood cells and immune development are an inherent part of a properly made bone broth.

With bone and joint issues at epidemic proportions in our current culture, it’s truly astonishing that this healing broth isn’t a staple in every household, especially considering how easy it is to make. Doctors should recommend this! Almost all the substances you see encapsulated and sold as bone, and joint health supplements on the shelf of every vitamin store are a natural component of bone broth! Collagen, gelatin, hyaluronic acid, chondroitin sulphate, glycosaminoglycans, proline, glycine, calcium, phosphorus, magnesium and potassium – bone broth is quite simply the best thing you could consume for the health of your bones and joints. And the best part is that it is a whole natural food – we probably only know half of the compounds in bone broth that benefit our health and well-being. And even better, vitamin supplements are expensive. Bone broth is cheap.

Bone broth is also great for connective tissue, a vitally important tissue in the body that supports, connects and separates body organs. It’s basically what holds everything together. To make connective tissue, we need the amino acids glycine and proline, and it just so happens that these two amino acids happen to be bountiful in bone broth. As a result, bone broth helps heal microscopic wounds in the body and is extremely beneficial in healing leaky gut.

But aside from all this amazing nutrition, you can intuitively tell how amazingly good your bone broth is simply by eating it. Having a bowl of bone broth in the morning alkalizes the whole system, gives a quick hit of fat and water-soluble nutrients, and this is something you can feel. It is nourishing right to the core, giving an overall feeling of warmth and well-being. You can feel your energy rising and your mood improving.

What Are The Benefits Of Bone Broth?

It was my job to pile the bones into a large roasting pan, brown them in the oven and then transfer them to a large stockpot, cover them in cold water, add the browned vegetables and wine and keep on a low simmer overnight. In the morning, the stock would be strained, and the whole process would be done again with the existing stock used as the water base to make a double stock.

At the time, the whole process seemed important, tied as it was to a long cooking tradition, and great emphasis was put on doing it the “right way”. However, what I didn’t realize at the time, and didn’t find out until studying nutrition years later, was that the whole process was there to create a truly nourishing and healthful component in the kitchen – one of the few traditions that have survived unaltered since our ancestors were using it to achieve vibrant health despite hardships.

Bone broth contains hyaluronic acid, a substance that plays an important role in your skin health. Hyaluronic acid has been shown to support several biological processes, such as tissue regeneration and wound healing. In addition, it helps your skin retain moisture, keeping it hydrated and healthy.

Bone broth is an excellent source of collagen, the main protein found in bones, tendons, and ligaments. During the simmering process, collagen is broken down into gelatin, which contains amino acids that support joint health. Bone broth also contains glucosamine and chondroitin, which are linked to reduced joint pain. The signs and symptoms of joint pain include stiffness, redness, swelling, and pain. In a nutshell, consuming collagen-rich bone broth may benefit your joints.

Drinking bone broth regularly may help your digestive system. Bone broth contains gelatin, which binds to water in the digestive tract to help food move along. An amino acid called glutamine is found in gelatin, which supports intestinal function and can prevent a “leaky gut” condition. Leaky gut is associated with several chronic diseases, including irritable bowel syndrome (IBS) and ulcerative colitis. Looking for bone broth benefits? Look no further! Bone Broth has you covered.

The gelatin in bone broth can improve satiation (the feeling of fullness), translating to consuming fewer calories overall [*]. Over time, this can lead to weight loss. One of the nice things about bone broth is that it’s low in calories but can satisfy your hunger and keep you feeling fuller longer. Studies show that consuming broth-based soups regularly can support weight loss goals.

5 Things To Know About The Bone Broth

Make no bones about it, you might soon be eschewing your morning cup of coffee for a mug of rich bone broth. Initially gaining traction among the Paleo crowd, this beverage is now widely touted as a therapeutic cure-all and has reached new levels of mass appeal in the United States, with takeaway counters selling bone broth by the cup and “soup-baristas” peddling the beverage from carts.

This trendy tonic is made by simmering bones in water over a long period of time to draw out all its nutrients and minerals into the liquid. Cooked with other ingredients like vegetables, herbs and spices, the umami-packed concoction can then be used as a base for other dishes or drunk on its own as a beverage.

Sounds like a marketing spiel for what is essentially soup stock? Here’s what you need to know about the bone broth wellness trend.

Time and quality of ingredients are of the essence in brewing bone broth.

Bone broth, soup stock, bouillon, consommé — what’s the difference? Not much, as it turns out. Bone broth is a stock that is made with animal bones and simmered for a long time. What differentiates it as a wellness trend is the care put into brewing bone broth.

Stock used in cooking can be made in two to three hours, less, if you use a pressure cooker, but a good bone broth is generally simmered for 24 hours or more. The slow and long cooking time draws the gelatin from the joints and leaches the minerals out of the bones themselves. By the time a bone broth is done, the bones should disintegrate with the push of a spoon.

Bone broth is certainly a world apart from store-bought stock, which usually contains added sodium, sugar, preservatives, and artificial flavours. Homemade broth or high-quality stock made at restaurants would typically be made with fresh ingredients and a hefty amount of patience to yield a brew packed full of flavour and ingredients.

Bone broth is as old as time.

Drinking boiled bones is nothing new. It was part of the Palaeolithic diet since man started cooking with fire; Europeans in the Middle Ages drank a restorative broth called restaurer. The English have sipped beef tea since the Victorian era.

But in recent years, the bone broth business has taken the Western world by storm.

As the Paleo diet gained traction, bone broth was a key element in this low-carb, high-protein diet. The bone broth craze has swept through the western world in recent years, peaking in the United States thanks to athlete and celebrity endorsements. Dedicated broth shops like Cauldron Broths in Seattle have opened, and chefs like Marco Canora of New York restaurant Hearth have started selling takeout cups of bone broth. Even supermarkets began cashing in with freezer packs and broth-enriched bottled juices. 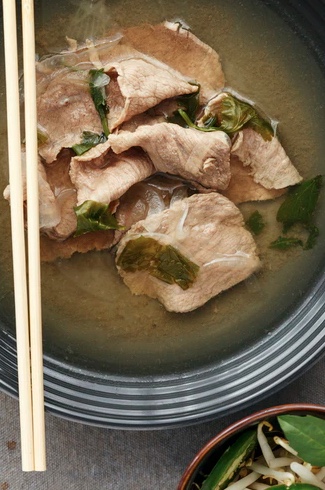 Bone broth has a whole host of health benefits.

Bone broth is a rich source of collagen and glucosamine, which protects the joint and improves skin elasticity, while glycine in bone broth helps ward off fatigue. The gelatin drew out from the bones also helps with the leaky gut syndrome and eases chronic diarrhoea, constipation, and food intolerances. Phosphorus, magnesium and calcium in the animal bones also seep into the broth, providing essential nutrients for healthy bones.

There are many ways to eat and cook with bone broth.

To make bone broth, all you need is a slow-cooker, bones of your choice, something acidic like apple cider vinegar which helps pull minerals from the bones and any preferred herbs and spices like turmeric or peppercorn. Different types of bones yield a broth with a different flavour and intensity but with more or less the same nutritional benefits. You can use chicken or fish for something lighter or pork, veal or beef bones for a richer broth. We have a wide range of chicken bone broth at Bone Broth.

Try this recipe for beef bone broth from wellness lifestyle brand COMO Shambhala. The recipe is easy but time-intensive, so making a larger batch and freezing the excess in individual portions is the way to go. Whether you drink it straight as a beverage or use it as a base stock for cooking soups, stews and other dishes, you can be sure that you’re assimilating all that bone broth goodness into your body.