Chicken bone broth is a bit easier to make for two reasons. First, the bones are not as dense. And second, the bones are easier to come by since more people consume chicken in Canada and the United States than beef. You can also use more readily available parts of the chicken for broth and soup, including chicken wings, drumsticks, feet, necks and carcasses. In addition, eating nose to tail makes it easy to find chicken bones.

Which broth is best for you? Probably not the answer you’re looking for, but it depends. Both are great sources of amino acids, collagen and gelatin. The chicken will have more hydrating minerals like potassium, magnesium and phosphorus, while beef has more collagen.

As you read above, chicken may be better for skin and joints, while beef is better for sleep and gut health. More research is needed to back up all of these benefits. Choose whichever is convenient for you in terms of sipping or cooking. Or do what I do and change your bone broth consumption with the season.  Check out our Melbourne beef bone broth here.

Beef bones are thicker and thus take longer to prepare and cook. As a result, beef bones are sometimes more difficult to track down. But they are readily available from most specialty grocery stores and butcher shops. Unfortunately, however, they are becoming more expensive to buy.

For beef bones, I’d recommend a mix of marrow and knucklebones. For specifics on bones, read about common mistakes experts make while cooking bone broth.

Bone broth is becoming the new coffee (yes — even for die-hard espresso lovers like myself). But which one is right for you? Well, when it comes to chicken vs. beef bone broth, most people report experiencing a greater boost in their energy levels from drinking beef bone broth. This is likely because cattle bones are much denser and contain a higher concentration of minerals than lighter, thinner chicken bones.

All varieties of bone broth are considered easily digestible thanks to the long simmer and cook time. However, some people find chicken bone broth easier to digest, suggesting it may be a better choice for those with weakened digestive systems.

The longer you cook your bone broth, the more concentrated in nutrients it will be. However, beef bones are much thicker and heartier than chicken bones when it comes to cooking time, so for optimal benefits, they require a longer cooking time and should be simmered for at least 24 hours (closer to the 36-hour mark would be even better). 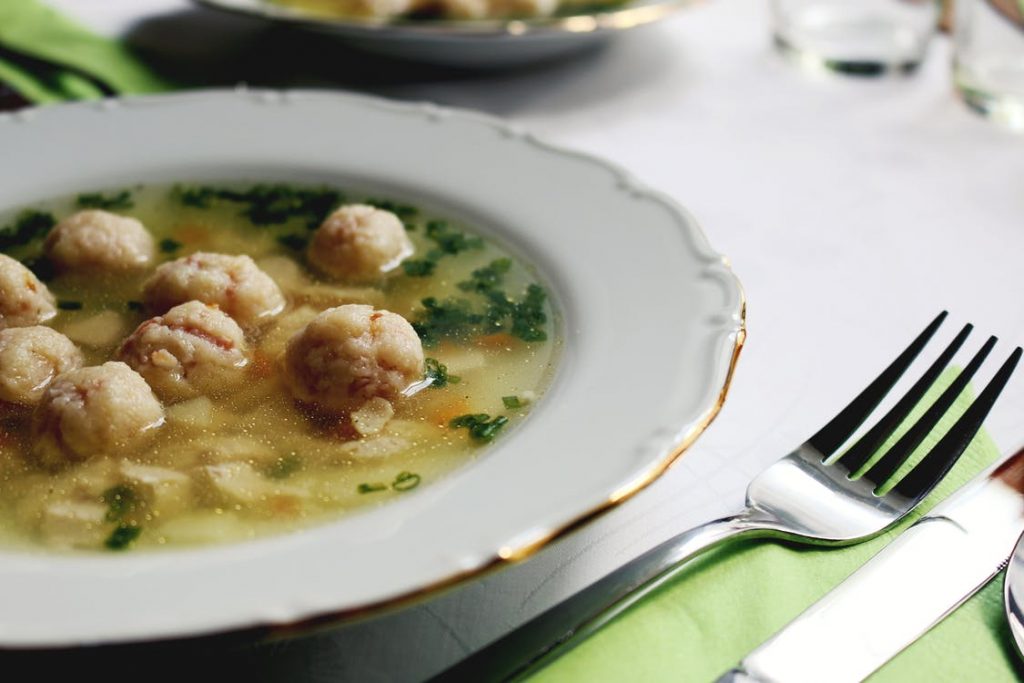 Chicken bones are lighter and thinner and can get away with a shorter cook time (18-24 hours) — however, a 24-hour cook time is always recommended to break down the connective tissue and bones to release as many amino acids and minerals and as much collagen and gelatin, as possible.

Beef for Hearty Flavour, Chicken for a Lighter Taste

Roasting bones for an hour beforehand will always add depth to the flavour of your bone broth, regardless of whether it’s chicken or beef. The flavour you prefer will ultimately come down to personal preference; however, homemade beef bone broth tends to have a heartier, richer flavour, while the chicken broth is on the lighter side.

Cooking time and temperature can also influence the flavours of beef and chicken bone broths (for example, if you keep your bones at a higher temperature for more than 48 hours, the colour will turn unusually dark, and the flavour may turn bitter and unpleasant).

As you can see, there are a few subtle differences between beef and chicken bone broth, which you may notice right away. Now, let’s take a look at how they measure up in nutritional value.

You really can’t go wrong when it comes to any kind of bone broth. As we covered before, all bones and connective tissue contain essential nutrients with every sip. With that said, here are the differences in the nutrient profiles of beef bone broth and chicken bone broth.

Our bodies cannot make omega-3 or omega-6 essential fatty acids, so we must obtain them from our diets. You see, while we need both, omega-3 helps reduce inflammation, and omega-6 promotes systemic inflammation when consumed in excess. Bone Broth has a wide range of chicken bone broth in Melbourne.

Now, going back to chicken bone broth: Poultry has a higher omega-6 content than cattle, so bone broth made from beef (especially from grass-fed bones) may be a better option if you’re watching your omega-3/6 intake.

Yes, chicken bone broth is slightly higher in protein than beef bone broth — as long as you add the feet.

Chicken bones may be less dense than heavy beef bones, and they do contain less collagen, but the magic of chicken bone broth is all in the feet. Yes, chicken feet contain collagen (more than beef bones), which yields a bone broth higher in protein.

If your bone broth doesn’t gel (which indicates the presence of gelatin and, therefore, a bone broth with more collagen) despite the type of bones you’ve used, a simple, quick fix to make your bone broth more gelatinous is to add a few extra chicken feet.

Beef bones are larger and heavier than chicken bones, which naturally will provide a higher concentration of minerals such as calcium, magnesium, phosphorus and sulphur, which have been shown to promote higher energy levels.

Far and away, our testers at Nourished Kitchen found that homemade bone broth consistently tastes better than any store-bought brand. So if you’re game to give it a go, you can get some great recipes in this cookbook.

It’s not surprising that homemade broths outrank store-bought since they’re carefully tended one stock pot at a time, and you can make tiny adjustments to the on the fly, adding chopped herbs, roasted onion or a sprinkle of spices as you go.

While homemade is best, there’s a handful of store-bought bone broths that taste great and offer up some fierce competition.

Slowly simmering bones and joints make the best bone broth in water with a splash of vinegar or wine, whether homemade or store-bought. Those hours of slow simmering at low temperature allow the collagen in connective tissue to dissolve into the broth, giving bone broth plenty of protein while maximizing its flavour by releasing the amino acid glutamine, which gives the bone broth its umami-rich flavour. Of course, adding vegetables, spices, and herbs toward the end of cooking can enhance that flavour, too.

Pressure cooking, which is hot, fast and under pressure, can also replicate the slow-cooked flavour of real bone broth and still yield a high amount of gelatin.

Many store-bought bone broth brands take shortcuts by decreasing cooking time or by using additives. As a result, they produce inferior quality broths, both in flavour and nutrition. 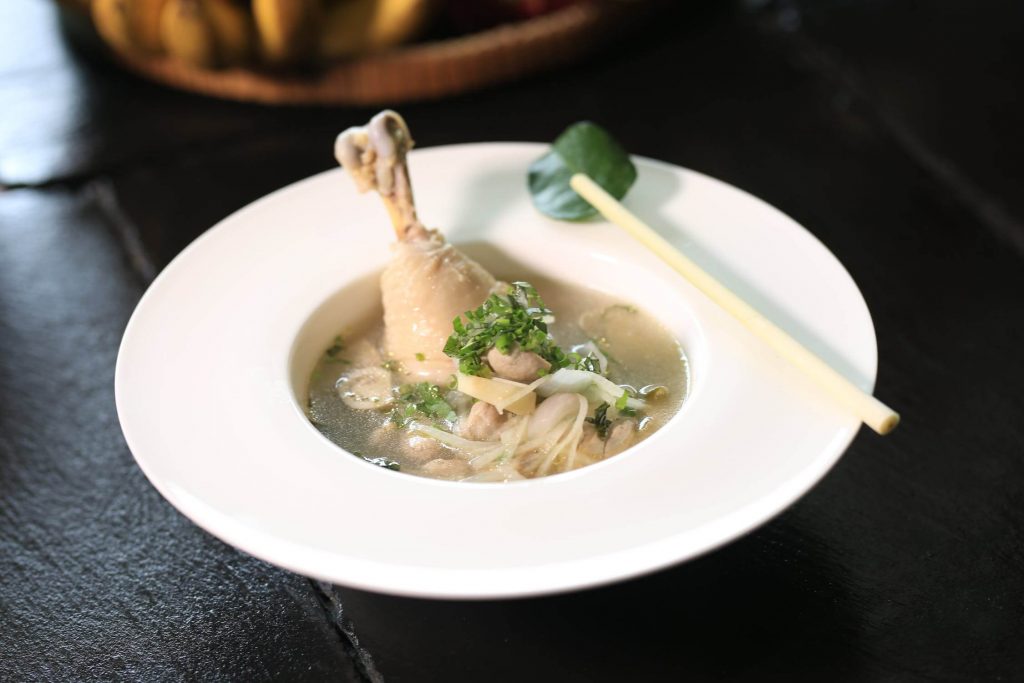 Bone broths should simmer long enough, but not too long.

To make deeply flavorful broth that’s also rich in protein and other nutrients, you should simmer broths over low heat for an extended period of time. Traditionally, this is a long and slow process, although pressure cooking creates a flavorful, protein-rich bone broth.

This long and slow process allows for the bones and connective tissue to fully release their nutrients, giving you a lusciously rich bone broth that’s full of collagen – a matrix of proteins that support bone, joint, gut and skin health while also supporting optimal blood sugar regulation.

Bone broths should cook long enough to release plenty of protein, but not so long that they begin to taste dull and overcooked. On the other hand, simmering bone broths too long can also break down their gelatin and dramatically increase their glutamine content. Glutamine is the third most abundant amino acid in bone broth. It helps your body build new proteins. It also supports gut and brain health; however, if you’re particularly sensitive to MSG (most people are not), foods that are very rich in glutamine might exacerbate your symptoms.

Bone Broths Should Be Made From Grass-fed Beef Bones, Pasture-raised Or Organic Free-range Chicken And Pork Bones.

Animals that live on pasture offer more nutrient-dense meat, milk and bones. Not only does this influence the flavour of bone broth to a small degree, but it also makes for more nutritious broth too. While all bone broth, including bone broths made from animals held in feedlots, should be rich in protein, protein is not all that is extracted when making bone broth.

Simmering bones for several hours not only extract protein from their connective tissues but small amounts of minerals and, potentially, trace amounts of heavy metals like lead and cadmium (source). Since heavy metals are ever-present in our environment, even organic foods can contain very small, trace amounts; however, conventionally produced foods typically have higher amounts of heavy metals like lead and cadmium. So, while it is not possible to completely avoid their presence, it is possible to minimize it by choosing foods less likely to contain them, and that means choosing organic and grass-fed or pasture-raised when at all possible.

The best bone broths are rich in gelatin, extracted from collagen found in the connective tissues of joints and bones. Gelatin is an easy protein to digest, and it supports gut, skin, bone and joint health. Gelatin is also responsible for the silky mouthfeel of bone broths, and it gives them a bouncy, gelled structure once they cool.

What To Avoid When Buying Bone Broth?

The best bone broth brands replicate not only the traditional, long slow simmer of making broth at home, but they also use the same ingredients you might use at home. That way, when you purchase a store-bought bone broth, you’re getting a broth that is as close to homemade as possible.

So look for bone broth brands that contain the same ingredients you’d use at home: bones, vegetables, herbs and spices, as well as an acidic ingredient like lactic acid (found in yogurt, kefir, whey and fermented vegetables), vinegar or wine. It’s that acidic ingredient that helps release collagen from connective tissue, giving your bone broth plenty of protein and a great gel.